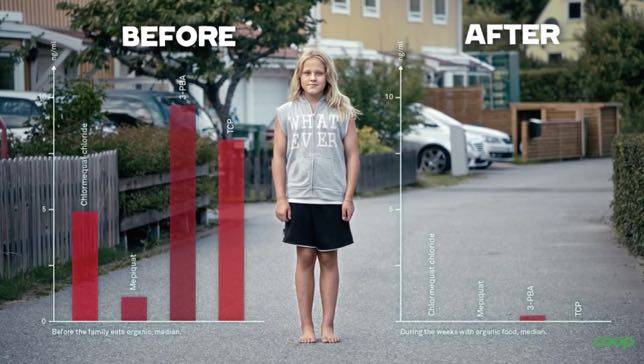 A family ate organically for 2 weeks, reducing pesticides in their bodies big-time. Here’s why it matters.

This shows how quickly some pesticides can disappear from the body after you switch to organic food. (Image: Screen shot from ‘The Organic Effect.’)

When a study is released that looks at the benefits of eating organic food, I see the results and comments about it all over the news, blogs and my social media feed. Now a new study is making the rounds, “The Organic Effect: What happens when a family that usually doesn’t eat organic food suddenly starts?”
A Swedish family that typically ate non-organic foods was chosen for this study, according to Fast Company. For one week, the five-member family ate normally, giving regular urine samples that were analyzed for 12 different pesticides. Then their diet was switched for two weeks to only organic food, and their urine was analyzed for the same 12 pesticides during that time.

After eating organics for just two weeks, almost all the pesticides that were found in their urine had disappeared.

The results, published in The Human Exposure to Pesticides from Food (the link will take you to the complete study in English) point out that the individual chemicals found before the family switched to organics are within the acceptable daily intake (p.17).

The acceptable daily intake (ADI) value is the maximum quantity of a substance that a person can consume daily throughout his or her lifetime without this posing any risk to their health. ADI is based on animal studies and represents the highest dose that causes no adverse effects in the most sensitive species.
But what we don’t know is how all these chemicals that have been found safe at certain levels on their own work in combination with each other. While it is “unlikely that a single substance would pose any risk to humans,” there is the possibility that “chemicals interact with one another to give a stronger or weaker effect than they would have individually” (p.19)

For me, the takeaway from this study is that so much is still unknown. We put chemical pesticides on our food and they end up in our bodies, and most importantly, in our children’s bodies. We’re told they’re safe. But as these chemicals continue to be sprayed onto the foods that we eat, problems like food allergies, ADHD, diabetes and more are on the rise and some studies link them to food.

We don’t know yet, but there may be reasons to suspect there’s a problem.

If eating organically can reduce pesticides and the combinations of pesticides in our bodies, I’m going to choose foods grown with as few pesticides as possible for my family when I can.