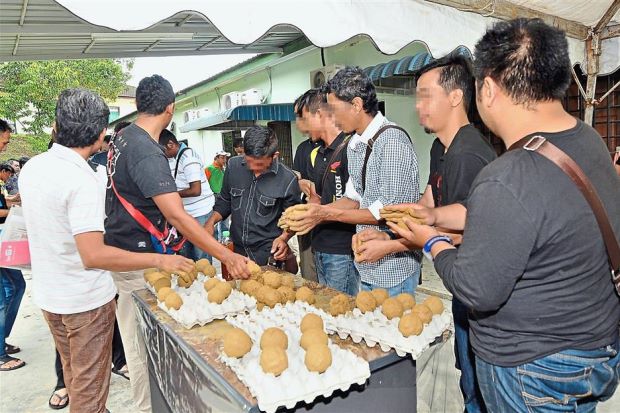 The first mudball project for recovering drug addicts, with the twin objectives of performing community service and conserving the environment, has been introduced.

It was initiated by the Johor Baru National Anti-Drugs Agency (AADK).

The programme, involving 80 inmates aged between 19 and 57, was an experimental project by the agency to help clean the rivers in Johor Baru.

“Those participating in the programme have been ordered by the courts to do community work for two years,” said AADK Johor Baru drug rehabilitation committee chairman Muhammad Azali Kalki Abdullah.

He added that the programme called effective microorganism (EM) mudball experimental project, involves moulding the soil and EM mixture into balls before they are thrown into the 12 rivers in the city.

“The mudballs are made up of a combination of dirt, EM (the main cleansing agent) treated rice-rinsed water and , a fermented organic matter made using sawdust and bran,” said Muhammad Azali during the launch of the programme yesterday. .

The mixture is prepared beforehand for the participants to roll into balls and then throw them into the rivers.

Muhammad Azali said that the programme would help the inmates gain confidence to better themselves after committing drug-related offences in the past.

He added that recovering addicts needed support because most of them lose confidence thinking that they will never be accepted by society after their conviction.

“Through such programme, they will automatically engage with the community and at the same time play their part in helping the environment,” he said.

He added that besides the mudball project, the recovering drug addicts in Johor and other states also conduct gotong-royong and attend seminars.

Muhammad Azali added that there are currently 1,460 drug addicts under their supervision in Johor Baru.