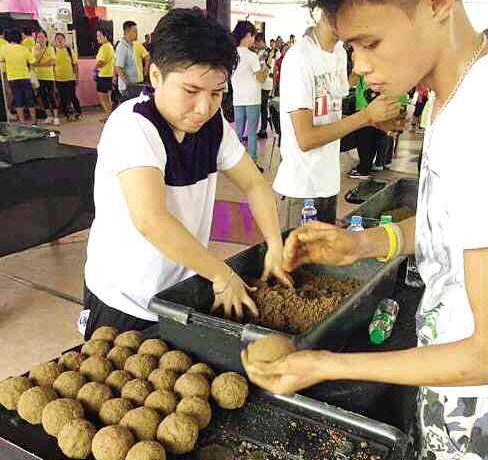 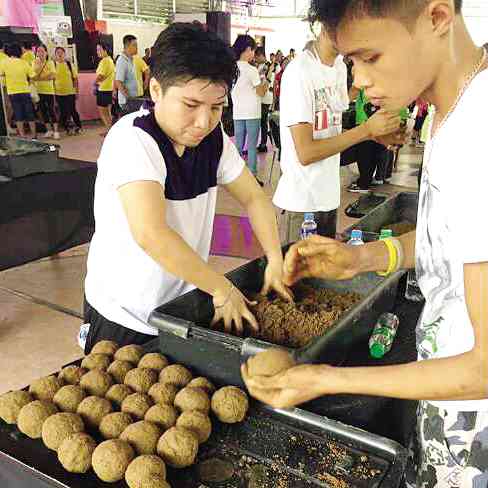 No ordinary mudballs but super mudballs are prepared by residents living near the Taguig River. The mudballs containing good microoganisms are then pitched into the river, releasing microbes to eat up organic waste. —CONTRIBUTED PHOTO
“Super mudballs” were thrown into the Taguig River on Friday to improve its water quality through the introduction of good microorganisms.

Felix Catigay, Taguig City environment officer, said that the beneficial bacteria was expected to eat the sludge and eliminate harmful bacteria, much like what a popular probiotic drink does for the stomach.

The “KOOPeRehabilitasyon ng Ilog” was initiated by the city government in partnership with the Cooperative Union of Taguig and Pateros (Countpa).

Luis Miranda, officer in charge of the Taguig cooperative development office, said Countpa members had pledged to finance the project through their social development funds. The ceremonial kick-off also marked the start of Cooperative Month.

Catigay said the mudballs project complemented the efforts of Mayor Lani Cayetano to revive the river which plays a role in the preservation of the city’s cultural heritage. The annual Taguig River Festival is celebrated with a fluvial parade marked by the exchange of food among boat riders and residents.

“There has been a big improvement since the rehabilitation is 100 percent backed by Mayor Lani. We’ve eliminated the floating debris and
solid waste through cleanup activities. The second challenge is water quality,” Catigay told the Inquirer.

The EM solution dominantly contains lactic acid bacteria, photosynthetic bacteria and yeast which will create an environment for aquatic life to flourish.

“Plants can grow and the fish will come back,” Miranda said, adding that the mudballs would gradually be introduced to the 21 creeks flowing into the Taguig River.

The city officials noted that cleaning up the waterways entails a total package as Taguig River is connected to Pasig River, Pateros River, Laguna Lake and Manila Bay, encompassing several cities and municipalities.

“While we work on people’s mindset and enforce the mandated mitigating measures, the mudballs can help make the broth palatable, so to speak,” Catigay said.